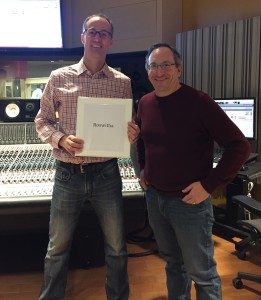 Kevin Bleau (music/lyrics) is a composer, arranger, musical theater writer, and performer based in Boston, where he teaches musical theater writing, composition, arranging, music technology, and harmony at Berklee College of Music. Kevin’s arrangements have been performed by Crystal Gayle, the Platters, Hollywood actor Wilford Brimley, Broadway divas Michele McConnell and Marni Raab, Miss New Hampshire, and many others. As Staff Arranger for the United States Air Force Band of Liberty, he arranged and transcribed more than one hundred popular songs; these arrangements have reached over five hundred thousand audience members since 1998. Kevin’s works have been featured on the Baltimore Symphony Orchestra Chamber Music Series, in Mechanic’s Hall (Worcester, MA), and at the legendary Hatch Shell (Boston, MA). He has received grants from Berklee College of Music, the International Horn Society, and the New York State Council of the Arts. Kevin’s fifteen-minute musical, The Mission, was performed at the 2009 International Cringefest in Manhattan and at the 2004 Birth of a Musical Festival, hosted by the writing workshop NOMTI. His full-length musical, If You Want My Body, received two partially staged readings at Berklee College of Music, which also supported the piece with a Recording Grant and a Faculty Fellowship. His screenplay, Fine Tuning, was a finalist in the Writemovies.com competition. Kevin received an M.A. from Eastman School of Music and a B.M. from Oberlin College Conservatory. He lives with his family in Milton, Massachusetts.

David Schrag (book/lyrics) makes his debut as a musical theater writer with Roswitha. His ten-minute plays have appeared and won audience awards in several festivals in New York, Boston, Los Angeles, and other cities. He has appeared on stage with Boston-area community theater groups including Theatre on Fire, Fiddlehead Theatre Company, Hovey Players, and Woodland Theatre Company. He is a graduate of Harvard College and Boston University’s Questrom School of Business. By day, he is Director of Information Technology for a law firm headquartered in Waltham, Massachusetts. He lives with his family in Providence, Rhode Island.